This weekend Jacob competed in the U .S. Department of Defense European wrestling championship in Wiesbaden, Germany where he claimed the title in the 152 pound (69 kg) weight category which included wrestlers (2002-2004) from American schools in Germany, Belgium, Italy, Spain, Turkey and U.K.

The first day of competition consisted of five qualification matches. Jacob won all his pool matches by great superiority (15 point advantage) or fall to advance to the championship bracket. On day two of the tournament Jacob won his semifinal match by fall in the first period. 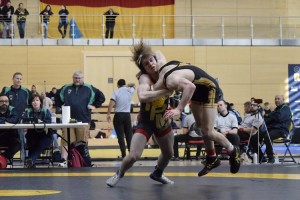 For the championship match Jacob faced an opponent that he previously beat twice earlier in the season. However Jacob’s opponent learned from those experiences and effectively adjusted his technique to deal with Jacob’s style of wrestling. This made for an exciting and challenging match but Jacob again proved dominant and after six minutes Jacob won 8-5.

Throughout the match the American crowd loudly chanted “Finland, Finland!” and “HPM, HPM!”